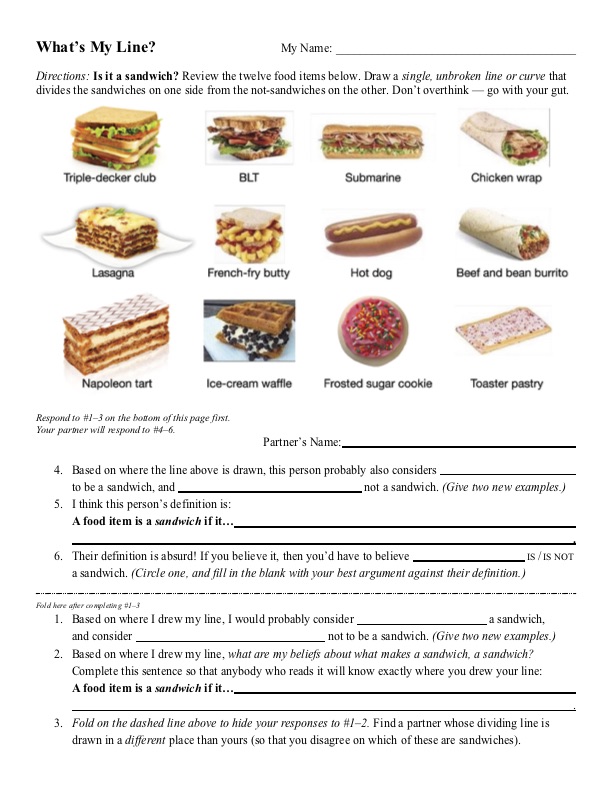 [mathjax]
Is a hot dog a sandwich? More than a provocative conversation-starter at a party, this is the kind of question that invites a healthy scrutiny of our own assumptions and implicit definitions. Here’s a first-day-of-class activity aimed at challenging the sanctity of definitions, so that students can begin to take ownership of a more humanized mathematical discourse. Click here to jump to the PDF activity. Update: Phil DeOrsey made an interactive Desmos version!

More than fifty years ago, Supreme Court Justice Potter Stewart famously offered from the bench a definition of “obscenity” that would be long remembered:

I shall not today attempt further to define the kinds of material I understand to be embraced within that shorthand description [“hard-core pornography”], and perhaps I could never succeed in intelligibly doing so. But I know it when I see it. —Potter Stewart, 1964

We all are born with a natural cognitive instinct to classify: to, after experiencing many specific examples of a phenomenon, develop a sensibility that will permit us to recognize when other examples fit that same pattern. I suspect that not many of our classification schemes are explicit — we could not if asked come up with a precise definition in writing for them. Many more of our classifications are tacit like Stewart’s. “I know it when I see it.” And so it is with sandwiches.

Americans eat a lot of sandwiches. By some accounts, a majority of us eat at least one sandwich every day. And the USDA estimates that about one-eighth of all calories we consume comes in sandwich form. Studies like those linked here, though, would be impossible to conduct without operationalizing the very concept of sandwich. What counts? What doesn’t? What definition can we all agree upon? Does such a consensus exist? Is it even possible?

Sandwiches are an excellent entré to the topic of definition, ontology, and deontology precisely because we all have some tacit belief about what’s a sandwich and what’s not, and there is just enough variation in those beliefs that it leads quickly to interesting negotiations. Is a hot dog a sandwich? What about a taco? A calzone? Where does lasagna fit? How about a Pop-Tart? Do we make allowances for open-faced sandwiches? Does that put us on a slippery slope toward pizza? And if pizza and Pop-Tarts are both in, aren’t we forced into saying that a frosted cookie is a sandwich? Is everything a sandwich? Where does the madness end? Can’t we just “know a sandwich when we see it?”

Math Twitter has been fairly obsessed with these questions in recent months. A trip through the hashtag #HoagieHomies turns up more good-natured controversy (and not a little good-natured trolling) than you might think this question could generate. But if there’s one group of people who can take a definitional argument too far, and who don’t have well-paying lawyer jobs that make them too busy for Twitter, it’s mathematicians.

I am not a philosopher — insofar as any mathematician can avoid being one. But teaching mathematics, especially teaching it to students who themselves will be called upon to teach it one day, quickly puts one face-to-face with a wide range of beliefs about what math “is,” and its proper orientation with respect to humanity. What is our place in mathematics? Do we invent math, or merely discover it? Does math embody a supernatural form of truth, and if so, what business do humans have with that truth? Or is it in fact more ordinary than that?

Me, as a math undergrad: THERE IS A DEEP AND FUNDAMENTAL UNITY TO ALL MATHEMATICAL THEORIES

Me, as a grad student: Math is just a thing that people do to describe stuff https://t.co/Sj8a0cmn0F

[T]here is quite a range of philosophical questions on which you take a position when you teach. By what we say in class we take positions on what mathematical objects are, the role of definitions in mathematics, the kind of logical rules that are to be followed, and how we determine truth in mathematics.

What something “is” in mathematics (ontology), Gold writes, is a question mathematicians are often uninterested in addressing. Instead, our primary stance is often the opposite: it doesn’t matter what something “is” — it matters how it behaves. It matters what patterns it fits. Don’t ask me whether it’s a duck; ask me whether it walks, talks, and quacks like a duck. That’s deontology.

And that’s what happens as soon as we begin to interrogate the sandwich question. Any attempt at ontology, an attempt to write down an unambiguous definition of what a sandwich “is,” quickly leads us to examples, or counterexamples, that we find unacceptable.

This exercise in deontology, of proposing, testing, and perhaps discarding and revising, definitions is as fun as it can be frustrating. And that is exactly the point I want students to grasp. Because mathematical definitions are not that different.

Is the number 1 a prime? Beware any mathematician who gives you a glib answer — because the question has both a very long and rich history and a variety of answers. And the consensus that has emerged in the 20th century isn’t so much that 1 “is not” prime, but rather that it “ought not” be prime, because the consequences of its primality would make other definitions and results more troublesome. If the primality of 1 is the hot dog, those other results are the tacos, the Choco Tacos, the eclairs, and all the other delicious things that we might rather not admit are sandwiches after all.

No, there's no inherent necessity.
This is a convenient convention — if 1 were a prime, most interesting statements would require to add that we assume p > 1, etc.
There is a similar dispute about connectedness (is the empty top. space connected?), but it is unresolved.

The ink is never really dry on a definition. That unsettles a lot of novice mathematicians. It’s not the message their school-mathematical curriculum has taught them. But it is an essential message I want them to learn, because it unsettles them in exactly the right ways. I hope that it helps them shake loose some of the bounds on their mathematical exploration, and help them to see their own self, agency, ownership, and humanity in their work. They can, in fact, “invent” mathematics. And test their inventions to see if they need updating. And assess others’ mathematics in the same way.

Okay: now I’ll stop acting like a recipe-blogger, and give you what you came for. Below is my first-day activity on definitions intended both to break the ice among students, and to help set the tone for a semester of inquiry and humanized mathematics. At least, it sparked some very spirited debate in my precalculus class — and would likely do so in any group of math students. (Maybe best with an intro-to-proofs crowd!)