For most students of mathematics, their introduction to algebra comes at the end of a long course of study in arithmetic. What are numbers -- beginning with the natural numbers for counting, then progressing through the integers, the rational numbers, and then real numbers (or at least some of them)? And, what operations -- addition, subtraction, multiplication, division, powers, roots -- can we use to transform one or more of these numbers into other numbers? This two-front exploration, of numbers as nouns and operations as verbs, creates a closed ecosystem of learning. And then, into that ecosystem comes an invasive species: the letter \(x\text{.}\) And students are told "this is algebra, now." And for many, their walk with mathematics is never the same.

High school algebra, while it looks dramatically different than the arithmetic that it follows, in fact does not change the rules of the arithmetic game. Variables take the stage and provide some powerful means of characterizing and then solving for unknown quantities, but those quantities are still the same numbers from before. The expressions on both sides of the equations are still knit together with the same kinds of operations as before. The main difference is the role of the unknowns in the equations. In arithmetic the only unknown quantity is the answer, the right-hand side of an equation whose left-hand side has only numbers and operations. In high-school algebra the unknown quantities live amongst the numbers, on both sides of an equation. That's all.

The goal of abstract algebra is to see past the particulars of that familiar system - the real numbers, the addition, multiplication, powers, etc. - to discover the underlying, general mathematical principles that make that system possible. Abstract algebra is about asking some similar questions: how can this expression be simplified? How can this equation be solved? But doing so in new, unfamiliar, and unexpected places where the nouns are not restricted to numbers, and the verbs no longer restricted to familiar arithmetic. That's the mindset in which we want to approach the subject, and in this section we'll begin with an introduction to two nouns, residing in two very different worlds of verbs. Welcome to the next step.

The first world we'll visit is the world of rational tangles. Rational tangles were first defined and explored by mathematician John Conway in the 1960s, and have since become a valuable and central object in the mathematical theory of knots and links. (You can find some resources and links - no pun intended - on knot and link theory at http://matthematics.com/oak.)

A rational tangle is a configuration of two strands created from an "empty tangle" of two parallel horizontal strands fixed at the vertices of a rectangle, using combinations of the following two operations:

In the world of rational tangles, then, according to this definition, every tangle is the result of a sequence of twists and rotations, \(T\)'s and \(R\)'s. Creating a tangle in person, with one person at the end of each rope, is a matter of enacting these moves in what mathematician James Tanton calls the "rational tangle dance."

So the objects -- the nouns in this world -- are "dances," words spelled out with \(T\)'s and \(R\)'s in sequence. The operation -- the verb -- is the act of following one dance with another. What can we say about these nouns and verbs? What properties do they have? How do they interact one with another?

These kinds of questions in abstract algebra are often inspired by corresponding questions about the operations of familiar arithmetic and numbers. For example, we might ask whether our operation satisfies the associative property that addition and multiplication of real numbers satisfies.

An operation \(*\) satisfies the associative property if, for all objects \(A,B,C\) on which it may operate, the following equation is satisfied:

Is the rational tangle operation of following one dance with another an associative operation? For example, if three people come up with dances \begin{align*} A \amp= TTRTT\\ B \amp= TRTR\\ C \amp= TRTTTR \end{align*}

is it possible that Equation (1.1) might not hold for these three dances? (Get some ropes and try it.)

Similarly, inspired by the corresponding properties of addition and multiplication of real numbers, we may ask whether an operation satisfies the commutative property.

An operation \(*\) satisfies the commutative property if, for all objects \(A,B\) on which it may operate, the following equation is satisfied:

We call the object \(I\) an identity for the operation.

A first blush will show us explicitly how to undo the rotation \(R\text{.}\) What's less clear is: can we undo a twist \(T\text{?}\) There is no obvious solution, since we don't have a simple counter-twist of lower-right over upper-right that we could use. So if we can in fact un-twist a twist, this inverse will have to come to us as a combination of more of the same twists and rotations, the same \(T\)'s and \(R\)'s. Figuring out what this inverse should be is a terrific exercise, and more subtle than you might think!

Now, let us enter a different world altogether. In this world the walls are decorated with images of regular polygons -- equilateral triangles, squares, hexagons, decagons, and the like, whose sides are all of the same length. Here the objects, our nouns, are quite different than they were in the land of rational tangles -- though the operation verb is surprisingly much the same.

In this world, the objects are symmetries: formally, they are linear transformations of the plane under which the polygon's image is equal to its preimage. Less formally, symmetries are "the things you can do with the polygon that leave it (setwise) in place." For example, the diagram below depicts ten different symmetries of a regular pentagon. 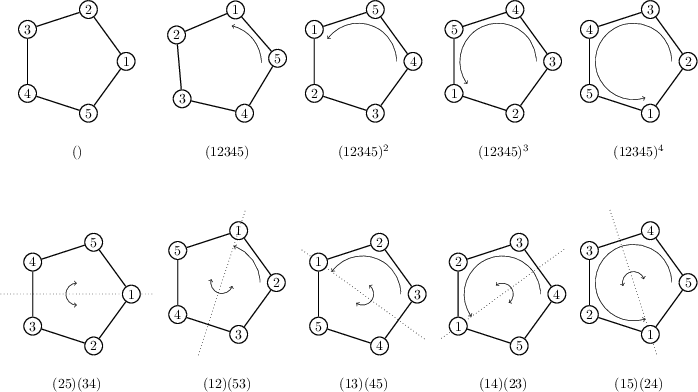 Some symmetries you may recognize as "reflections" and are characterized by their axis of symmetry over which the reflection happens. Others you may recognize as "rotations," where every vertex takes the same number of steps to its right or left. It's not an obvious result at first, but it can be shown that every symmetry of a regular \(n\)-gon fits one of these two descriptions. And, moreover, it can be shown that they all can be created out of -- you guessed it -- two symmetry operations that we will call \(T\) and \(R\text{.}\)

The following two linear transformations of \(\mathbb{R}^2\) are each symmetries of the \(n\)-gon:

While the objects in this new universe are different than they were in the previous section, the operation is the same: combine two symmetries together by following the action of one with the action of the other. For example, the animation below illustrates the symmetry of the hexagon that we'll call \(RTR\text{:}\) rotate, then reflect, then rotate.

We may ask the same questions about these \(T\) and \(R\) as we did in the land of rational tangles as well. Is the operation here associative (1.2)? Is it commutative (1.3)? Are there inverses for every symmetry -- can we undo every rotation? Every reflection? If so, what are they? How do these answers depend on \(n\text{,}\) the number of sides in the polygon you're working with?