The three-week #HumanMOOC, a course on “Humanizing Online Instruction,” is concluded.

I signed up and participated in the course because, while I haven’t taught a (fully) online course before, I’d like to do so someday and, meanwhile, I wanted to learn more about how to engage in good pedagogy online for the sake of my face-to-face and hybrid courses. I saw it as an opportunity to hear from experienced online educators and, indeed, scholars of online pedagogy, what works best in online teaching beyond telling students “here are my PowerPoint slides and a discussion board, now go to town and learn.” END_OF_DOCUMENT_TOKEN_TO_BE_REPLACED

I use peer review pretty regularly in my teaching, especially for project work, but I haven’t done much to design it in an online-friendly way. In particular, I haven’t yet used a peer review rubric to give students guidelines on what kind of feedback I’m looking for. (Mostly I’ve been in the habit of checking to see that feedback was given, rather than assessing its quality.)

So here’s a rough outline of a project I’m working on for the upcoming spring semester, and peer review guidelines intended to create some cognitive presence outside my classroom around it. END_OF_DOCUMENT_TOKEN_TO_BE_REPLACED

The next time I teach a web hybrid course, I want it to be a great online course with the meetings as a bonus (rather than a great face to face course with web content as a bonus).

I’ve been thinking a lot about the Community of Inquiry (CoI) model of online learning during the #HumanMOOC course on humanizing online instruction. The model (Garrison, Anderson, and Archer 2000) positions student learning as a function of three interrelated forms of presence in an online environment: 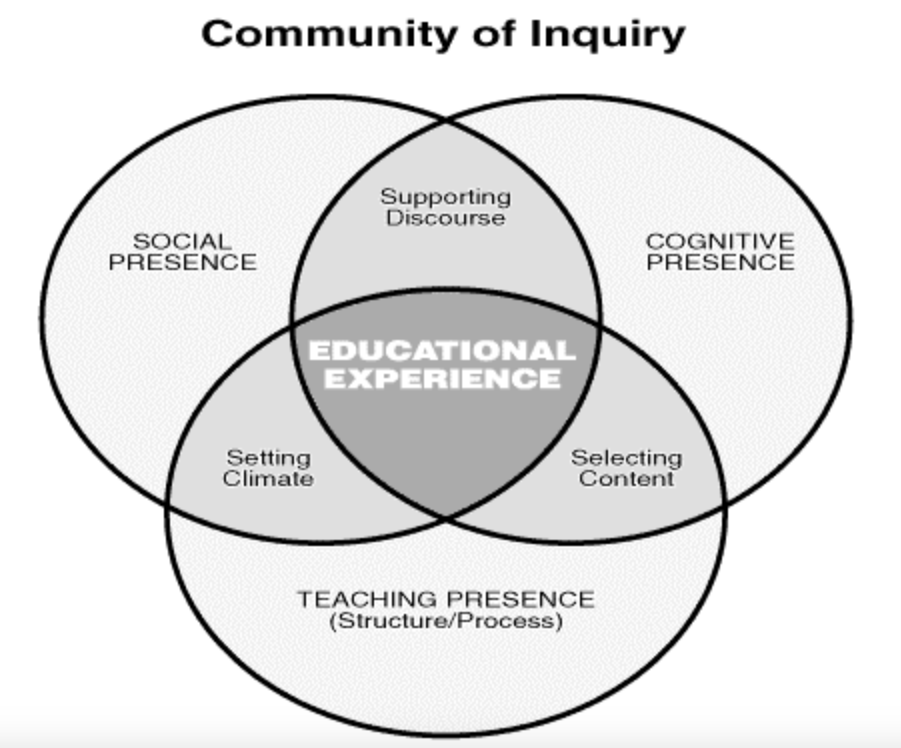 I wonder whether trying to do higher-order thinking in an online class is like trying to do physics homework at a rock concert. Distractions are everywhere, and the milieu isn’t designed for “system-2” engagement of higher cognitive function. (Kahneman, 2011) The internet, like the rock concert, is fundamentally a vehicle for dopamine delivery, not deep discourse.

But there is hope, as Peter Shea reports in today’s HumanMOOC webinar on cognitive presence:

He and his team did a quantitative content analysis on all (tens of thousands) student interactions in an online course and connected them with measures of teaching, social, and cognitive presence, and was able to describe the relationships between these forms of presence using a structural equation model and CHAID (Chi-square automatic interaction detection) tests to show that students who were most cognitively present in an online course were those who:

Likewise, the most cognitively present students were also those who

So the moral of the story in my mind is that students will “bring their brains” to an online course that makes them feel connected to one another, positive, and engaged in focused, topical discussions of course content. I like to think I do well enough with the connectedness and positivity — encouragement of social presence — in my courses, but what I most want to work on is my creation of, and especially my presence in, discussions of course material. I’ll be thinking a lot about how to do that in ways that will work for my students as well, as next semester approaches.

An article came across my Twitter feed that hit upon a challenge I didn’t realize I had in thinking about how to run an effective online class:

In the article, not only does Steve Kolowich make a point that I fretted about in the beginning of this blog:

[W]hat often makes students choose the flexibility of online learning — being too busy to enroll in a classroom course — can also make it harder for them to keep up with their studies.

What’s more, he also talks about how the primary point of contrast between students and instructors — the learning management system (LMS) — is often designed around asynchronous, text-based interactions (posting course materials, dropboxes for written work, text-centered discussion boards) in ways that make it difficult to integrate richer media interaction. In short, for instance, Blackboard isn’t set up to be a transformative platform for multimedia engagement — it’s a bulletin board-cum-gradebook for trading in text.

Which is fine as far as it goes. But what I miss most when I teach web-hybrid courses is the social interaction that happens in the classroom (and hopefully also out of class, in the hallways or in office hours). And I have tried to use video to amplify my pedagogy in the past but struggled to connect it naturally with the rest of my course. So I says:

And I didn’t realize it at the time, but my frustration with getting students to engage in text-based interaction spilled over into frustration with getting them to interact with a text more generally. That is, it’s not just that I’m unsure how to invite students to meet with me via text, but also that I’m unsure how to invite students to a text at all. Partly because I teach in a discipline that, particularly at the undergraduate level, values parsimony in its written expression (“the best” proof, or “the most popular” textbook, is often the shortest or the one which requires a minimal level of textual engagement), I haven’t been forced to reckon with my students’ reticence to read as much. It may also be why I’ve found some success in video-based flipped pedagogy: for my students, I got the sense that videos weren’t supplementing their reading, they were supplanting it. Was that what I really wanted for them?

That said, as I puzzled through this in the public arena of Twitter (yay for Open Pedagogy), I was fortunate to have one of my colleagues push back from a different disciplinary perspective:

Her point, as I took it anyway, was twofold: (1) that the message is more important than the medium, and (2) that engaging with text is essential for all students, whether online or in person, whether studying Victorian literature or algebraic topology. So I’m coming full circle to the question:

How do I use the tools at my disposal in a course, particularly online tools, to invite students to engage with their text?

What I’ve tried, that mostly hasn’t worked, so far:

So what are some other ways to use technology to transform how we invite students into a text?

Learning is inherently a social activity, so an online milieu that does not foster social interaction is not one that will foster learning. How do you create social presence in online learning?

The prompt that got me thinking this week was

As usual, my frame of reference is face-to-face teaching, so I thought about this from the perspective of students who miss my in-person class meetings. What do they do to compensate for the (social) experience they missed? Typically, one of three things, from rarest to most common in my recent experience:

So given that creating social presence is a less obvious practice for me to do online than in person, and doubly so for my students, I’m very interested in learning more about how good social connections when they have existed in my teaching — for example, in team-based learning — can be, as the frame suggests in Chapter 8 (Holton 2012) replaced, amplified, or best yet, transformed by the technology and new possibilities that online learning offers.

Video – in other words, video of talking heads – has always been an important part of instructor presence for me, even as an accompaniment to face-to-face courses as it typically is for me. But I haven’t found a way, or at least a simple way, to replicate the “chalk-and-talk” that comes so naturally to me as a classroom instructor.

Right now my workflow is: create slides in LaTeX including green screen where desired –> capture and annotate with Doceri app –> capture video in QuickTime player and Doceri simultaneously –> use iMovie to combine –> upload to YouTube. The final results look really good and I have a lot of flexibility, but the time involved for producing a ten-minute video this way is easily a couple hours long.

Does anyone have any more “realtime” ways of replicating the chalk-and-talk in a video setting? Or do you replace this in your online teaching in other ways?

One of the reasons I haven’t been more eager to teach online is my own views about what both faculty and students expect online learning to look like. My Twitter feed today had a couple good examples. Tweeted from a big online learning conference, the faculty (or at least faculty-developer) perspective:

I’m participating in the #HumanMOOC course on human presence in online education precisely because I do think this way. (Although I am in fact ready to learn.) But worse, I’m daunted by the perspective that exists among students as well, many of whom opt for online courses precisely for reasons that make human interaction difficult:

Why do online courses require group work? I take them online because I don't want to interact with other people.

Clearly some students expect online learning to be impersonal, even anonymous. They expect little interaction with their professor and less with their classmates. They expect an easier course in some cases. They may use anonymity for nefarious purposes (harassment, academic dishonesty). Some of this is stereotype, but I expect not all.

So when I think about a class-wide video chat such as the one shown in the first tweet above, I think about how challenging that would be to make happen. The technology – both hardware and software – however seamless on my end, I envision it being a potential nightmare on the student end. If a student “can’t get their microphone to work” for several weeks, will they drop the class? Will my campus IT support be able to help, especially if the student is not physically present on campus? What if the student can’t afford the technology necessary for this kind of interaction?

And worse, my previous attempts at synchronous interactions with large groups of my students online have flopped spectacularly due to students’ inability to schedule the time around their other obligations. It’d be a dream to have all 25 of my students in an online course meet at one place and one time virtually for a class discussion, but I know that many of them will have opted to take the course online precisely because they don’t want to abide by a regularly scheduled meeting time. So these are big hurdles to overcome, but I’m open to having my thinking reoriented. There are, I’m sure, a lot of ways to human interaction in online learning beyond the synchronous video chat, and I’m looking forward to learning more about them.

I’m not new to teaching. I’m not new to technology, or to the internet. But however I’ve smushed those things together before, I still have not had the experience of “teaching online.” That’s in part because my institution – Bridgewater State University – has not been as quick as others to jump into online education (but we might soon), and in part because I teach in a discipline, mathematics, that poses special challenges to online learning that I haven’t yet learned how to overcome.

I also haven’t been a student in an online learning environment before. Today I’m starting a class called “The Human MOOC,” offered by Canvas Learning, about ways to translate the human interactions that make teaching, and make teaching fulfilling and effective, into online education. I’ll keep notes and share thoughts along the way in this blog under the #HumanMOOC tag along the way.